It’s 4:45 am on a Saturday in late July. Normally I would be sound asleep, but instead I’m standing at the base of Stratton Mountain, GoPro in hand, with Hubert Schriebl, his camera in hand. We are about to hike the mountain, climbing straight up Standard (the trail under the Gondola) to reach the summit. For Hubert, this isn’t unlike many other mornings. In fact,  beginning his day with a hike up Stratton while it’s still dark is more normal to him than being in bed. As much as I enjoy hiking, getting up and being functional so early in the morning is often a struggle for me… but it is always worth it. While the most visually rewarding times are for the sunrise or sunset, hiking up Stratton at any time is a truly gratifying experience. The journey, the physical exertion, the wildlife, the flowers, the views, the camaraderie amongst your hiking buddies or even the occasional random hiker(s) you may encounter and the sense of accomplishment after finishing, all contribute to making the hike up Stratton an adventure I’d recommend to anyone looking for some outdoor fun. 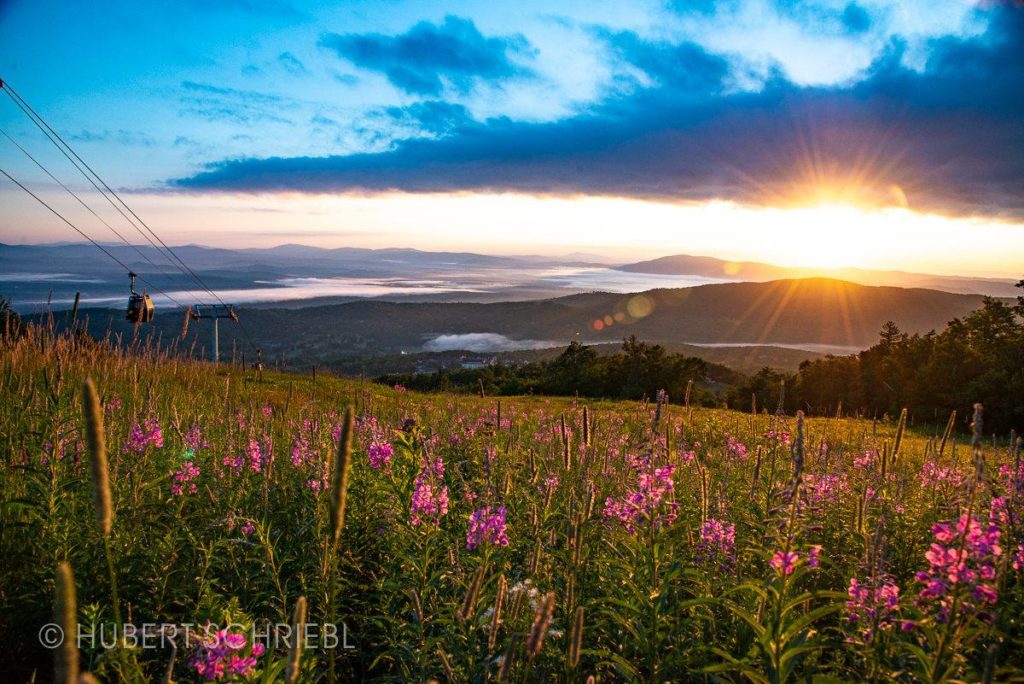 If you’re familiar with Stratton than you probably know or know of Hubert Schriebl. If not, you’re certainly familiar with his work. He’s a prolific photographer who has been a part of the Stratton community since the early years. His book “STRATTON, The First 50 Years,” celebrates the resort’s 50th anniversary, featuring its history and the personalities who helped it grow, in descriptive narrative by Peggy Shinn, well known for her Team USA Olympic coverage, and splendid photographs by Hubert. This fascinating book is available in both hard and soft cover and can be purchased here. “Hubert’s stunning photographs have thrilled Vermonters for decades. Born in Austria, he arrived in Vermont in 1964 to teach at the Stratton Ski School and made it his home,” writes Peggy.” He has traveled, skied and taken photographs around the world, from the Arctic Circle and the Himalayas to the American Southwest, including four Winter Olympics. His work has appeared in SKI, Skiing, GEO, Time, Newsweek, Sports Illustrated, Vermont Life, and Stratton Magazine since its inception.”

There’s something special- well many things really, about this renowned photographer, beloved Stratton icon and all around one-of-a-kind cool dude making Hubert the person he is. Not only will he beat me to the summit with ease, he’ll do it while cracking jokes and making conversation the whole way up, all while shooting stunning photos of the sunrise and mountain surroundings. What does he like most about hiking Stratton this time of year? “The days are longer… Summer is constantly changing! Flowers come and go and so do the birds!” he says. His favorite time to start is before the sunrise because it’s cooler and the photos he is able to capture are most dramatic. The most rewarding aspect of his early morning summer hikes? “It makes me feel better! And showing my photography to people that can’t be here and enjoy the beauty!” The humble person he is, when I ask him how he’s able to shoot such amazing photographs he simply responds, “How I shoot good photos? I just don’t know!”

I remember a time last summer when Hubert stopped by the marketing department and casually mentioned that he had hiked to the summit and back three times in a row. In one morning. After asking him why, he simply replied “Why not?” When I asked him if he remembered that day and how long it took him, he stated, “I started before sunrise! Then when I was back at the bottom it was only 8 am and I felt good and was ready for two more times and by noon I was done!” Hiking to southern Vermont’s highest peak three times in a row before noon just because, says a lot about how dedicated and passionate he is about Stratton and maintaining his active lifestyle. What motivates Hubert to stay so active and keep taking so many great photos? “To use football as a metaphor” he says, “I am in my last quarter of life and there is no OVERTIME!” After reaching the summit, I’m sweaty and out of breath but Hubert shows no signs of having just climbed 2,003 vertical feet. We enter Hubert Haus and enjoy some snacks. And yes, by the way… the Hubert Haus is named after him. It was a surprise for his 65th birthday in honor of his contribution to the mountain and its visual history. Have you ever noticed a ton of notches carved into that wooden railing at the summit? Each notch signifies one hike to the summit. How many notches are there up there right now? According to Hubert, he puts the count around 700. That’s right, Hubert has hiked the mountain over 700 times – and he didn’t start making notches until his 70th year when he set a goal of hiking 100 times a year. “It gives me the satisfaction to know that I inspired many people to hike and enjoy the beauty of nature,” he says.